The making of digital and physical things

Easter is right around the corner! Wiggling Bunny is project that will bring a paper bunny to life as it wiggles and moves its ears. I originally got the idea when I was om nom nom on some mochi at Minamoto Kitchoan in SF. I saw this really cute rabbit paper box, but it costed $6! For paper? I say “Nay”. 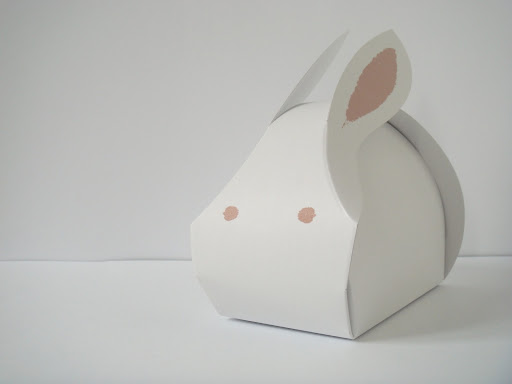 I then thought about how I could construct a similar box from paper. After a few trials, I’ve created this template. Here is the finished product, not bad, eh?

Steps to create this project:

1. Cut out the bunny shaped template pictured below. You can download the pattern here.

2. Use conductive tape, Flexinol (types of shape changing memory alloy), and mosfet to form the circuitry depicted below. Use thread to secure the flexible around the ears area. Also put snaps on the paper to make space for the Lillypad Arduino micro-controller.

Note: make sure the Flexinol is sown snugly on the ears

Note: make sure all the connection point on of the copper tape are secure, use a multimeter to check conductivity.

This is how the front of the bunny looks. make sure all connection points are secure.

3. Program the Arduino board and snap on the bunny, assemble the bunny in shape

When I tested this project, it did not work. I think it’s because I did not sew the Flexinol on the ears tight enough, thus even though it shrunk, it did not cause a movement. I will recreate the project using another construction of how the Flexinol adheres to the eras. TBD…

I changed the construction of how I attached the Flexinol to the ears. I used two pins to secure the Flexinol.